CARB Throws Down Gauntlet on Cold Storage
2020 isn’t that far away. It looms only a mere 3 years and 5+ months as the world turns. Many, many things can happen between now and then and without going into detail, I think the picture is there. Life’s uncertainties sometimes drive intentions.  In the world of air quality, regulatory agencies use their best intentions when planning control measures, but oftentimes they are merely throwing things against the wall to see what sticks.


The latest effort of the CARB regulatory leviathan is part of a larger sustainable freight plan that was introduced in 2014 and is set to be re-introduced, new and improved, this summer. The Sustainable Freight Initiative (SFI) is looking for emissions reductions across the transportation network and as of today, one segment of the supply chain, the refrigerated transport sector, is first up on the chopping block, again.
This isn’t the first time at the dance for refrigerated trailers and their cold blooded counterparts. First it was the engines, now this time around, it’s how and where those refrigerated engines are operating when not on the road.

It is obvious that refrigerated trailers are used for transport over the open highway and down the street, but maybe not so obvious is that they can also be used for stationary storage when there is no available cold space under roof or behind doors, hence, “cold storage”. The engines run, the trailer stays put and the stuff stays cold.


Since the engines in this situation are stationary while running to maintain temperature sensitive cargo awaiting transport or consumption, CARB sees an opportunity to get off the diesel and plug into the grid, thereby reducing thousands of tons of CO2e in the atmosphere. In order to hasten this transition to the electric future, CARB has begun the grinding process of regulatory development, starting with outreach which will be followed by reflection on their outreach.
The initial offering from CARB on the cold storage rule proposes a 2020 start date for a long list of potential covered entities. Truck stops, rest stops, grocery outlets, county fairs and of course the all-encompassing category of “other” are all up for a potential control measure that will limit and eventually eliminate, cold storage time.


And like it or not, whether we know it or not, one way or another, everyone relies on cold storage.
All perishable food and medicine is transported in a truck equipped with a refrigerated unit of some kind, truck box or trailer. While ice cream and strawberries may be at the top of many lists, the refer transport industry also moves highly sensitive explosives, lifesaving pharmaceuticals and pretty much every perishable item out there.


Oftentimes, trailers are used during peak operation time to store temperature sensitive items out in the yard when facilities run out of cold storage space behind the doors. This is commonplace amongst grocery stores and distributors during thanksgiving, the super bowl or whenever they run out of space for anything that needs to be kept cool. It also may happen at distribution centers or ports or railyards, where refer units must sit and wait if they do not have a place to unload. Or at outdoor events like state or county fairs, festivals and the like.
While no formal details exist, previously a staggered ban on cold storage was proposed where the first limit was at 24 hours, then 1 hour then basically nada. But it was slated for initial implementation in 2023, the latest info from CARB today is looking at the 2020 timeframe for initial implementation and no proposal for a staggered phase in.


Basically, all of this is leading up to the elimination of the diesel engine for cold storage in California. While CARB will be also be looking at efficiency improvements to eliminate cold storage, they are seriously leaning heavy on plug in or some non-diesel based technology to reduce CO2 emissions from the sector.
With a potential three year window before initial implementation, CARB will have their work cut out for them. No one really has a firm grip on how much cold storage is happening out there so in order to grasp at one CARB will be sending out a survey or possibly a number of surveys.

The agency wants to get an idea of how much time trailers spend idling for cold storage and where it is happening. This will give them an idea about how far they need to go to regulate the practice and more importantly, what infrastructure needs are out there.  Costs range from five to seven thousand dollars per plug, either pedestal or on-dock.  So, it can get expensive. Not to mention peak energy costs when pulling off the grid during certain times. The list of potential challenges does not end there.

Food safety and availability of universal plug-in infrastructure for electric refer trailers or eTRU’s are a major concern, near the top of the list in fact. Then again, pretty much everything is at the top of the list. For instance, FMCSA Hours of Service rules may force truckers off the road for mandated rest periods and without a pedestal or something to plug into, there will be no choice but to run the diesel engine if there is even a diesel engine to run.

Additionally, since truck parking is a major issue in this state, there is concern that the existing truck parking network will need to be reconfigured to allow for plug-in infrastructure which may result in a loss of available spaces. At a minimum it will require a major cash outlay on behalf of the facility operator at the other end of the spectrum it may put facilities out of business.

Equally as concerning is how distribution centers will need to reconfigure in order to provide idling trailers something to plug into when waiting for an open dock. And adding even more salt into the frozen margarita of refer operation is the fact that most existing refer engines DO NOT have the capability of being retrofitted to run on electric standby. For the equipment operator, that means they need a new engine that can run on electric standby after possibly just purchasing a Tier IV final engine to comply with the TRU rule that didn’t come equipped with electric standby in the first place. 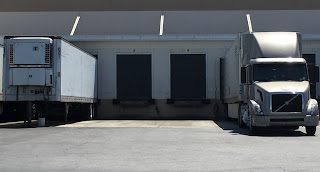 Of course the icing on the cake is the fact that with these type of rules, typically CARB figures that if you are going to buy a new engine anyways, why not get the best available technology? That best available technology in their minds may in fact be an electric or cryogenic or cold fusion or hydrogen or whatever engine, as long as it’s available and it is not diesel.


Once the SFI is released we should get a bigger picture on how this cold storage piece fits into the whole freight emissions enchilada. Until then the cold storage rule will go through the regulatory outreach process with workshops and of course, you guessed it…. surveys. If you want to know more visit www.cafleetsoltuions.com.

Posted by Matt Schrap at 5:36 PM No comments: